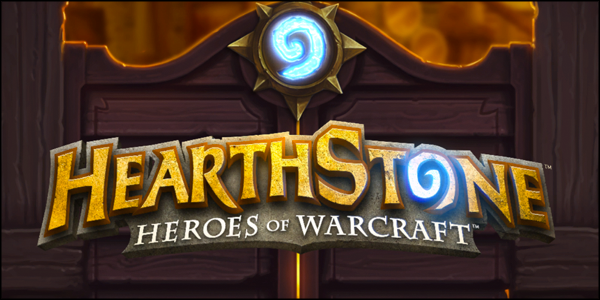 I finally got into the HearthStone beta and was very excited to try it. It is shiny! I’m writing about it because it is WoW related and it is on my mind right now. Most of the posts I have seen about HearthStone are from more hardcore type players. I am a very casual gamer and I thought my perspective might be interesting.

I have never played a collectible card or trading card game before. I think they came into fashion sometime after I was in college, and at that time I was busy working two jobs and going to class…so yeah. I really didn’t have time to play games. (I actually studied all the time. I was a very boring college student.) I vaguely remember one friend talking about playing Magic, but I admit I was never that interested so I never checked it out.

This is what I think of when I hear a CCG or CTG mentioned.

The funny thing is Yu-Gi-Oh was also a real card game. I imagine this anime was kind of like the Pokemon anime (which I also enjoyed) in that it was a marketing tool for the game.

Anyway, Yugi or Yami (he was possessed by an ancient Egyptian dude who was somehow taller and awesome at card games–don’t question it. ) always had one special rare card that allowed him to win matches. His friends also had their own special cards.

Even though I liked the Yu-Gi-Oh anime, I thought the game they played within it was silly.

I liked the way cards were used better in Cardcaptor Sakura. The Clow Cards weren’t game cards at all. Instead they held magic creatures that could be summoned and I think that’s why I liked them better.

So wait, why am I rambling about anime on my WoW blog? I’m trying to give you an idea of where I came from before trying out HearthStone.

I’m someone who always thought card games were a little silly. I never understood why people would spend so much money on random packs of cards or even why they collected cards. I didn’t get why they would go to comic book shops to play either. A friend’s eleven year old son tried to explain it all to me once–he played in Yu-Gi-Oh tournaments–and while I listened to him because he really wanted to talk about it, I didn’t absorb anything useful.

When Blizzard announced HearthStone, I wasn’t too excited about it. I was never the least bit interested in the WoW TCG. The demo looked fun though and I am glad I finally got into the beta. 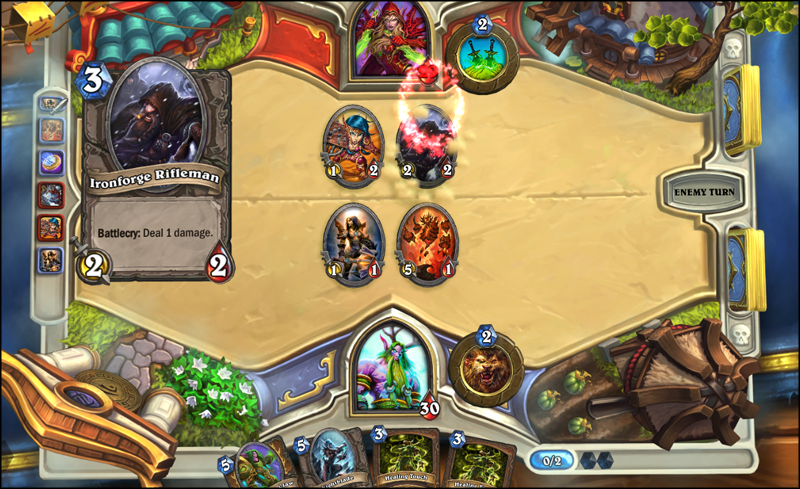 This is a good looking game. The characters are recognizable and voiced and the spells and minions they use are going to be familiar to any WoW player.

The game feels good to play. It is satisfying to pull out a card and slam it down. The spell effects are nice. The things on the corners of the map can all be clicked on and played with too. It also has good background music and sound effects. The cards talk and emote. In short, it is a good polished feeling game.

You start out with a basic mage deck and you have to defeat the other heroes to gain access to their decks. While you are doing this, your hero gradually levels up. You can also play other people, though I’m not sure if you gain experience that way or not.

I am pretty bad at HearthStone so far. My heroes are defeated every four matches out of five. The good thing is you gain experience even if you lose. You gain more if you win though!

I’m going to need a lot of practice to really learn how to play. I am having fun trying to win, but it gets annoying fast when I lose repeatedly.

I have learned to play in shorter bursts and to stop when I get frustrated. This means Hearthstone is not always a good choice for me if my day has been stressful.

I haven’t tried playing anyone else yet because I’m trying to get a better grasp of what the hell I’m supposed to do first. My friend, Astaria, made a wonderful tutorial on youtube that has helped me a lot. Give it a look if you are clueless like me.

So far it is pretty obvious that the basic decks aren’t going to cut it. It is possible to win with them, but unlikely. Expert or better cards are going to make your game more fun. You can earn more cards by leveling your heroes up to ten. Unlocking all heroes gives you one hundred gold which you can then spend in the store on better cards.

Let’s talk about the in-game store since that is the main way Hearthstone is going to make money. The game store is easy to find, but it is not spammed or annoying.  You don’t get pop-ups or anything suggesting that you should visit the store. I’m mentioning that because I loathe mobile games that do that.

Buying expert card packs will make the game easier because you will have better cards.  The game is designed this way and it makes sense since it is otherwise free. Each expert card pack comes with at least one rare card and a chance at epic or better cards as well.

On the beta anyway, there is a big warning that says, “You are about to spend real money!” This shows up when you open the store. The card packs seem pretty reasonable to buy. They run from $2.99 for two packs all the way up to $49.99 for forty packs.  I have no idea if these prices are comparable to normal CCG/TCG card packs or not.

I bought seven packs of cards because they are affordable enough and I am beta testing all of it – even the store.

Opening the card packs is fun. You can hover over the cards and a rare card will have a blue glow. An epic card will also glow purple, and anything above that will probably glow too.  When they flip over and reveal what the card actually is, it is fun. I got one epic card and nine rare cards with my seven packs. You also win a pack of cards to open after leveling a hero deck to ten. You can win gold from doing the daily quests–I know, dailies?!–and battling other people. The gold you win can be spent in the store instead of real money.

I will probably play this game when it goes live. It won’t replace WoW for me, but I will dip in on occasion. I will probably buy some cards too, but I don’t see myself going crazy and spending $150 dollars on it…ever.

I think HearthStone will really shine once they get it finished and ported to tablets. It is the sort of game that would work really well on an iPad or a Kindle Fire etc. I will be more likely to play it once it gets to a mobile device because it seems more like a kill some time type of game to me than a sit down and play game.

My computer is a four year old Macbook Pro. HearthStone is playable on it, but there are occasional visual glitches or pauses. Pretty much anything that would be an animated cut scene stutters. I get the same pauses when I play WoW and other games because my computer is getting too old to play newer games. That said, it is perfectly playable even on mine – I just notice when it pauses.

3 comments on “A Casual Opinion of HearthStone”