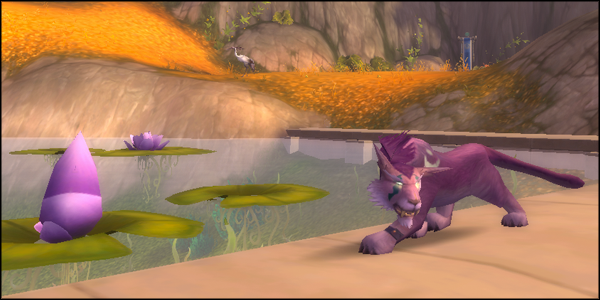 The pretty lady in the banner is my Druid, Brennwyn. That picture is an old armory cutout from sometime in Wrath.  She has always been a feral druid, but back in the day she was wearing mostly spell leather and cloth because I thought it was pretty (and I had no clue that she should have been wearing agility gear.) 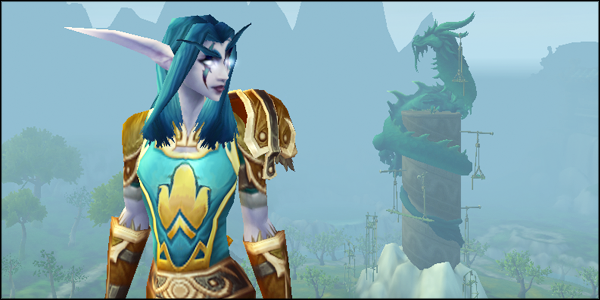 Bren is the very first character I ever created in WoW. I made a druid at the suggestion of my friends. “You can play any role,” was the reason most gave me. The one I listened to though told me, “You can be a cat!”

Seeing the Night Elf druid in the Vanilla WoW trailer is what made me want to play the game. I wanted to be a cat like her! Unfortunately you did not learn cat form until somewhere around level twenty. Getting to level twenty is so easy now, but it was a giant task for me when I was a beginning player.

I had never played a MMO before. I also play on a laptop and I did not have a mouse back then. So I had a lot of trouble even walking–I had never heard of WASD! I used arrow keys and gestures on my trackpad to play. It was really hard to click on anything.

Teldrassil was beautiful though. It is still one of my favorite places in Azeroth.  I kept playing even though I died a lot. That spider cave in the Night Elf starting area used to be a cave of terrible death and lostness! I still flinch when I go near it on baby Nelves.

I was not good at killing anything because I put talent points in all three talent trees. I had no idea about game resources so my method to attack things was to wrath mobs until they got close and then I beat them with my staff until one of us died. I had no clue how to drive the Bear so I usually didn’t try to switch to it. (My issue was not understanding how rage was generated. None of my attacks would ever work because I had no rage.)

After I learned Cat form, I would still wrath things until they got close and then I would go cat and try to melee them to death. It wasn’t very effective!

During this time my altoholic tendencies blossomed and I rolled a baby paladin. My pally provided a melee character I could understand and so poor Bren was parked in Darnassus.

She had managed to get to Ashenvale through sheer will power so she was level twenty something at the time.

Eventually I got better with WoW. My DK and then my pally both reached level eighty. Around this time patch 3.3 rolled around and the Dungeon Finder became a thing.  I also had played Wintergrasp on my max level kids and I used the commendations to buy heirlooms for my much loved druid.

I actually learned to play Cat in late Wrath and I leveled Bren both through quests and the new Dungeon Finder. She was in Outland when Cataclysm launched. After leveling my main, she was my second character to hit eighty-five.

Brennwyn was also my first character to kill the Lich King. I took her on a retro raid with my guild because we needed more ranged. Ha! I do have a Boomkin offspec but I am so bad at playing it that my friends said, “Umm yeah…why don’t you go back to Cat!”

I am not a great feral druid, but I do understand it better than almost any type of caster. I lack subtlety and my default is set to bash. Clawing and biting fits into that pretty well. Mostly I love running around as a cat. All the forms are fun, but being a kitty makes me happy.

I’m still leveling Bren. She is now level eighty-seven. Some of the quests are unintentionally hilarious when paired with druid forms.

If I could have gotten away with carrying that jade as an Orca too, I would have! It amuses me how pissed the Bear looks at having to do manual labor. The Stag looks like it is beneath him.

I will always have a soft spot for Brennwyn. I’m going to level her up to ninety soon – she might get there this weekend. Once there, I’m not sure if I will work to play her at end game or not.

I don’t have a lot of time and I prefer to play my DKs and my monks.

But, druids are an awesome class and one I will never stop playing completely.  I love soloing stuff as a Bear and that might one day translate to tanking. One day I might learn how to heal on one too! At the very least I will be a purple cat and enjoy running around the world. (Boomkins, I love you, but your spec confuses the hell out of me.)