I main not one, but two Death Knights. Therefore Death Knight Week is going to get more than one post from me.

I really love the DK starting area. I loved it the first time I created a Death Knight and I still love it over twenty DKs later. It is hard to explain sometimes why I love it so much.

I love getting to be evil and do bad things. I love smacking the hell out of the Scarlet Crusaders and collecting their skulls. Most of all, I love being redeemed at the end.

One of my favorite things to do is to take screenshots. I decided the best way to show my love of the starting area would be to illustrate it.

I created a new Death Knight this morning specifically for this purpose. I might play Tyri more later or I might not. However she was fun to take through and a nice model.

So, here we go. This is the Death Knight starting area through Tyri’s eyes.

They are then redeemed. Darion Mograine breaks away from the Lich King and helps Tirion Fordring to drive Arthas away. He then pledges the Knights of the Ebon Blade to the duty of defeating the Lich King.

I don’t have good pictures of this because another player got in the way of every possible shot. If he had acted normal it would have been ok…but no. He was riding around on a mammoth and being stupid so it didn’t work.

I took a lot more pictures than this, but I tried to edit it down to the most relevant ones.  Lastly, I leave you with some notable NPCs who show up again in Wrath raids. You have already seen the Vampire Elves. 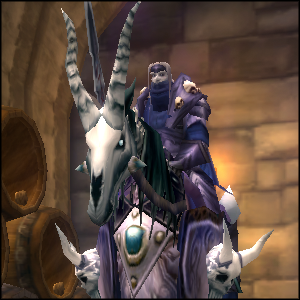 To the left is Noth the Plaguebringer. To the right is Baron Rivendere.

Hopefully this conveyed some of my love for the zone. I really had fun running through it again and taking pictures. Death Knights are the best class!

3 comments on “A Visual Ode To the DK Starting Zone”