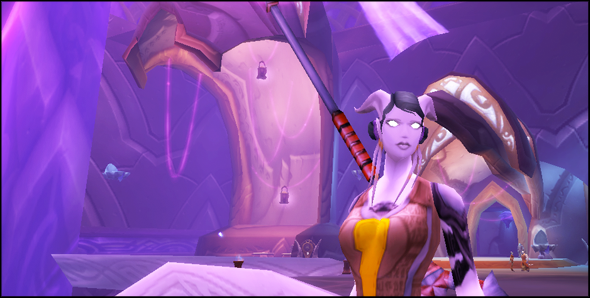 This week WoW Insider asked a simple question in their community blog topic. What is your favorite playable race?

The answer for me was easy; I love the Draenei.

I have a bunch of them too!

Some of my girls are on different servers. In this picture you see two Death Knights, two Ret Paladins, two Monks, (hoof to the face!) a drunken Shaman and a Warrior who is also a bank alt.

(Yes, I wrote that to the tune of the 12 Days of Christmas.)

Bonus Note: My Mage (not pictured) has also been a Draenei. Twice. Currently though she is a Pandaren.

So why do I like my Spacegoats so much?

There are lots of reasons. I like the way they look for one.  I enjoy getting to run around as an eight foot tall hot alien chick who kicks ass. I mentioned that first to get it out of the way because it is my most superficial reason.

Draenei are my favorite race because I like them as a people.

They are the last remnants of a people who fell to evil. I like them because they took a stand even though it meant losing everything comfortable in their lives and refused to fall.

The Draenei strike me as a people who are very mindful of their past. They do not allow themselves to forget. I’m sure part of this is due to how long they live. 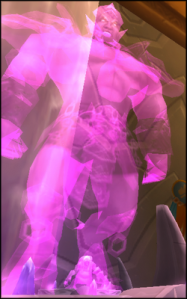 Prophet Velen was alive on Argus and some of the Draenei NPCs probably were as well. They remember Kil’jaeden before he was a lord of the Burning Legion. They remember the Eredar before they were an evil race.

I feel like they keep up the holograms of their enemies both as a reminder and a warning.

Never forget who we were or who we could become if we grow careless.

I think the words they say to each other are also subtle reminders. “Be kind to those less fortunate,” is said often. “Blessings upon your family.”

But we are also cautioned to, “Remember the lessons of the past.”

By now there probably are some Draenei who are tired of running and never having a true home. They have been disinherited for something crazy like 25,000 years. In all that time they have been hounded and massacred every time the Burning Legion caught up to them. It is pretty amazing that despite that, they still keep their faith and refuse the darkness. It probably helps that the Light in the form of the Naaru dwells with them.

When their ship crashed and caused destruction on Azuremyst and Bloodmyst Isles, the Draenei started working to set things right. They did their best to repair the environment and to help all the creatures and people who were effected by the crash.

They did this even before they were members of the Alliance. They did it because it was the right thing to do.

Now that they are members of the Alliance, the Draenei are committed to them. The Exodar has been repaired and they could run again if they chose, but Velen has decided they will stay and make a stand on Azeroth.

I like that. Maybe I read too much into the back story of a game race, but I like the goodness behind them.

I don’t share the worries that some people have expressed about the Naaru really being evil. I like the idea of there being some godlike force for good in the world. I like playing the people that follow those godlike beings and who brought them to Azeroth.

I don’t see hypocrisy in the words they speak. I feel like the Draenei really do try to do the right thing most of the time. They are a people I can ultimately believe in and that is why they are my favorite race.

So give them more storylines, Blizzard!

4 comments on “And the Winner is…the Draenei!”