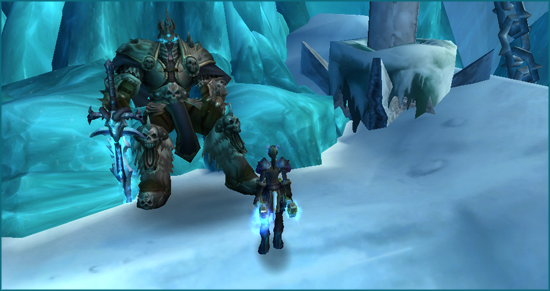 This week I decided to do one of WoW Insider’s Community Blog Topics before the results post comes out. This particular topic asks, “What is your favorite class and spec?”

I’ll start by saying I have played every class in WoW. I like them all because I am an altaholic. I tend to prefer melee over ranged and DPS over tanks or healers.

My favorite class by far is the Death Knight. The story of Arthas has fascinated me since Warcraft 3 and I still think it is one of the best stories in WoW. I love the tragedy behind the Death Knight story.

Originally I thought one of my characters would have to “die” when they hit level fifty-five in order for me to create a Death Knight. I leveled a Ret Paladin with this in mind. I was very happy to learn that I didn’t have to sacrifice my pally after all, but decided to keep the Paladin backstory for my DK.

The moment my Paladin dinged fifty-five I logged off and created my Death Knight. I already had her name planned out.

Fuyumi Ono wrote a light novel called Shiki that eventually became a manga and then an anime. It is a story about mostly vampires who descend on a small town and kill everyone. The vampires are called undead demons or shiki. I thought it was a very apt name for my Death Knight.

Shiki is still my main today.

I absolutely love the Death Knight starting area. It is awesome and fun and makes me laugh every time.

I enjoy the quests even if they are evil. I have fun reveling in it and killing as many Scarlet Crusaders as possible.

(All of my DKs keep extra crusader skulls as trophies in their banks.)

I love rescuing Koltira every time. (He really is a male damsel in distress!)

I love capturing a normal horse and causing it to be turned into my undead steed. I even like the quest on a giant frost wyrm which I suck at because it is a vehicle. My favorite part though is the very end.

I love the battle for Light’s Hope Chapel. I love the redemption at the end. I really like the idea of the Knights of the Ebon Blade joining the Argent Dawn to fight the Lich King. It all works for me story-wise.

I love the way Death Knights play. The runes combined with a “blue rage bar” make sense to me. It is intuitive in a way that few other classes are. The only playstyles that come close for me are Windwalker Monks and to a lesser degree Retribution Paladins.

The first time I saw a friend raise a ghoul, I clapped in glee. (I am a dork.) I couldn’t wait to learn that awesome spell myself!

Death Grip has made me cackle happily from the very first day. It still makes me stupidly happy to use it.

Path of Frost is a spell I wish I had in real life. I enjoy using it to fish and to survive long drops. (I have it glyphed.)

I haven’t played Unholy main spec since Wrath, but I still like the gargoyle–worthless though it may be at times. I also like getting enough hits of Deathcoil in to change my ghoul into a big super freaky monster dude.

I love the visual effects of Bone Shield. I miss having it as an option as DPS.

My favorite spell is Army of the Dead. I absolutely love calling forth minions to fight for me. This spell is awesome and can save a wipe – granted it can also cause one if used unwisely.

As for my favorite spec, I started out playing Frost back in Wrath. I was terrible at it, but had fun nonetheless. I still miss Frost tanking.

In ICC I went Unholy because it had higher DPS. I thought the Wrath version of Unholy was a lot of fun to play. I haven’t really caught up to how it has changed in Cataclysm and Mists though so I can’t comment on it. I have one baby DK slowly leveling as Unholy so I can relearn how to play it.

My main spec has been Frost again since Cataclysm. I went back to Frost to level and stayed there because they ‘fixed it’ so it was decent for DPS. I have stayed Frost since then because I like it. I prefer the haste version and use a two-handed weapon. I have dual wielded before and I likely will again, just not at the moment.

To sum up, I really love Death Knights!

They are fun to play and have interesting Lore. I like that they have two class specific mounts as well. Plus they come with their own badass instant transmog gear so you never have to look sloppy while leveling.

I could also say they make good tanks and soloers – and they do! – but mostly I love running around and bashing the crap out of stuff until it dies. Death Knights do this very well.

2 comments on “My Favorite Class is…? Your First Guess Doesn’t Count.”