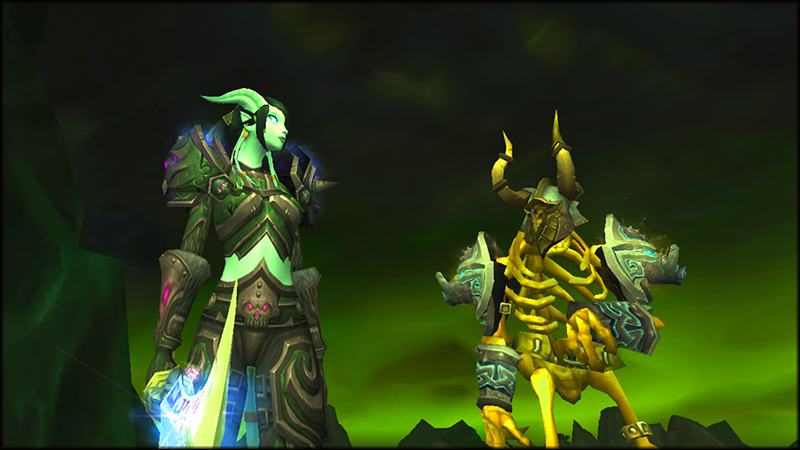 I haven’t written much since Blizzcon because there isn’t a lot going on in WoW right now. I’m not in the Legion alpha either so I don’t feel like I can actively add to any Legion discussions until I have first hand experience.

Instead I’m going to talk about what I have been doing regarding my death knights. This might be helpful to other DKs out there or it might just be rambles. As per my usual disclaimer, I’m not a theorycrafter or a highly skilled player. I’m a casual raider at best.

I have switched my main’s spec from 2-hand frost to unholy simply for the DPS gain. I noticed that Ask Mr. Robot consistently shows 2-hand frost as the worst or next to worst DPS spec on almost every fight. The difference is so great between 2-hand frost and the other specializations that if you are trying for any sort of progression raiding, I would suggest switching specs.

This makes sense because Blizzard is killing 2-hand frost in Legion. I suspect they aren’t worried about balancing it because “soon” it will no longer exist. They might even want to actively encourage players to switch out of it so the transition is easier.

Normally this wouldn’t bug me too much, and I would continue to play 2-hand frost regardless, but because of the heroic moose lock my guild is now doing heroics after completing normals. I felt like I needed to up my DPS game in order to help them.

I picked unholy over dual wield frost because I already had a decent 2-handed weapon vs. two good 1-handers. It really annoyed me to find out I instantly did 10k more DPS without even knowing how to play the spec. It is what it is though.

Unholy has changed quite a bit since Wrath. I’m enjoying it though I don’t play it perfectly. I still feel like I am randomly hitting buttons sometimes. I chose an easier playstyle (Necroblight) because I have never been good with plague leech and I figure a button I almost never remember to use vs. one that I always remember works better for me. In add heavy fights, like Xhul’horac, it works really nicely.

I do feel squishier as unholy. I think this is because death strike is harder to use. It could also be subjective. My lower geared DKs don’t really show much of a difference between unholy and frost when it comes to survivability.

My main is a bit overgeared for normals and undergeared for heroics so that could also be adding to the squishy feeling. Or maybe it is my addiction to all the delicious green lava all over Hellfire Citadel. (It tastes just like mint! Felmint.)

We have a dual wield frost DK who runs with us on occasion and his DPS is better than mine. This is due in some part to gear but also because of skill level. I am not the most skilled player, Y’all. I’m mentioning this because on most fights I can get close to even with him by playing unholy.

If you are a 2-hand frost player wondering what to do, dual wield is also an excellent option. I will probably switch to that once we get that damned moose to test out how it plays in comparison to unholy. I’ve always been a better frost player so it might do better for me.

Frost appeals because I love the artifact weapons for it. The unholy artifact is kind of meh and in some cases downright gross with bugs flying around it. This opinion is not in regard to their quests or stories, just the base appearances.

If you are a 2-hand frost player, I suggest trying both dual wield frost and unholy out now before you are forced to switch with the 7.0 patch. At least that way you can test things and try to plan how you will approach Legion. Everything I have seen in alpha news points to a main spec being really encouraged.

Finally, I will leave you with this blast from the past because I can.