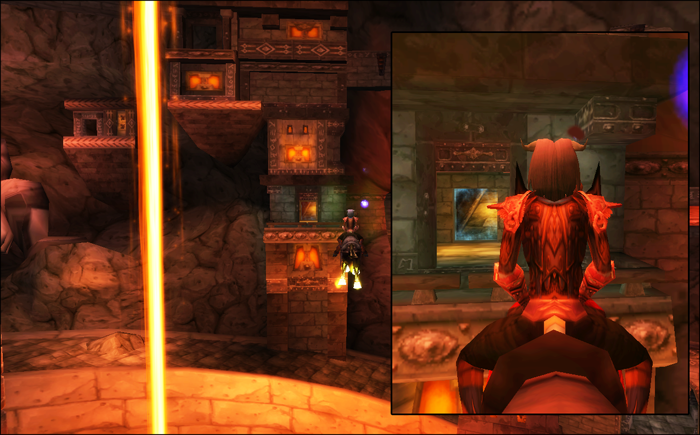 Getting attuned to BWL is no longer necessary. UBRS was redone for Warlords of Draenor and bosses were changed and removed. I’m leaving this guide for posterity, but it is now defunct. 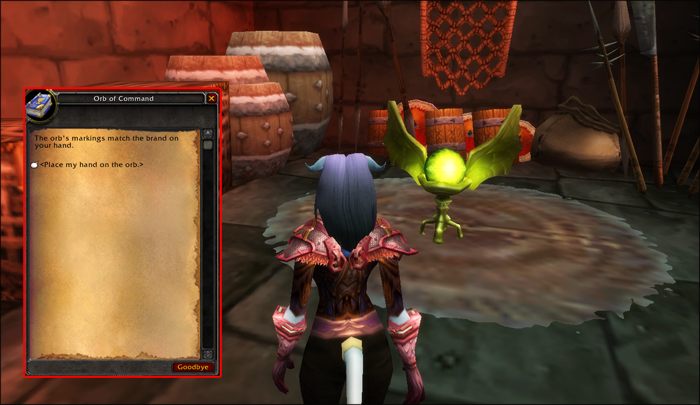 To get into BWL, simply go to the orb and click the dialogue. Boom! You are inside.

As an added bonus, the first boss now instakills the eggs so soloing this for pets is super easy!

As I mentioned in my last post, I get horribly lost in Blackrock Mountain. I had a terrible time running through Blackrock Spire because it is not a dungeon I ever run. The lure of new pets in Blackwing Lair compelled me to do it anyway.

This guide to getting attuned to Blackwing Lair is probably annoying detailed. It is designed to help super lost people like me.

Doing this took several runs through Blackrock Spire. I originally went through on my evil pally, but I didn’t think the shots I took explained things well.

So I went and rousted my drunken shaman out of a bar and asked her to please help me out. I ran through it again and took more pictures.

This guide is screenshot heavy. I did that mainly because I understand things better when I can see what people are talking about when it comes to directions. 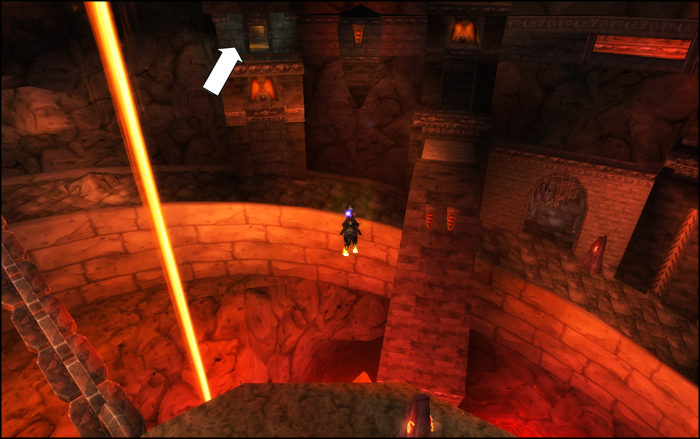 This shot is oddly framed to give a visual reference of both the summon stone and the balcony we are aiming for. Flying makes getting to Blackwing Lair and Blackrock Spire so much easier! If you don’t have old world flying, you can also go to the middle platform and run up the chain you see to the left there. I suck at that and never actually succeed, but it is possible. It involves jumping from the chain onto some rocks and then jumping onto the balcony.

Fly up to the balcony and go inside. Don’t go into the instance yet.

Unlike Molten Core, there is not a helpful quest to get attuned to BWL. Instead we must kill an NPC, the Scarshield Quartermaster, and get a letter from him. There is no outward indication that this particular NPC needs to die. Fortunately he is always in the same place.

He should always be in the alcove on the map above and he respawns fairly quickly if you find someone else has already killed him. If you run a nameplate addon–I use Tidy Plates–the plates of his two guards will cover up his name so he isn’t immediately obvious unless you know to look for him. 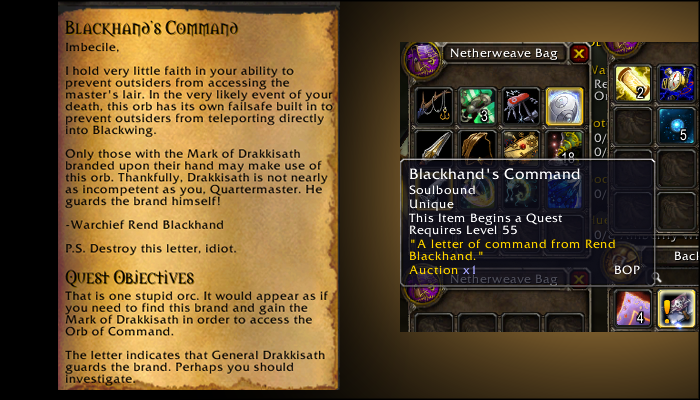 Once you have the letter, accept the quest and head back to the Blackrock Spire entrance and go on in.

This is where it gets complicated. Where we ultimately want to be does not show on the map because it is several floors up. If you go the wrong way you will end up in Lower Blackrock Spire. We want Upper Blackrock Spire. 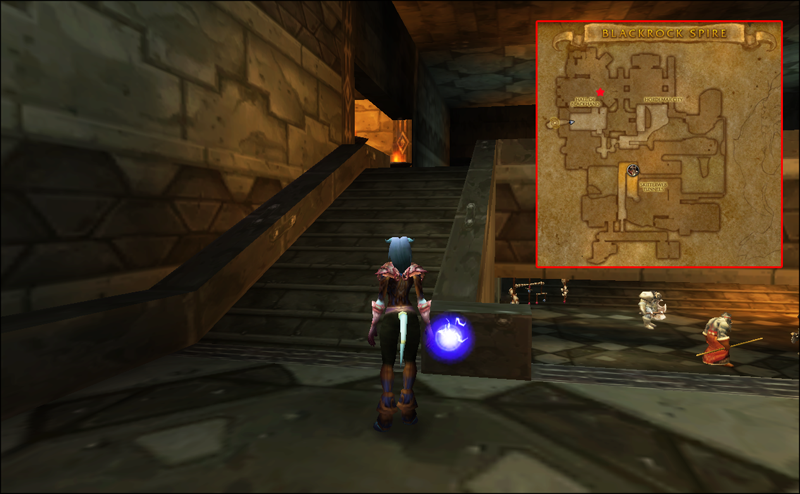 Stick to the left of the big room and go up the stairs. The red star on the map indicates where we are heading.

When you get to the room on the map above, you will notice a locked door. The only way to get that door to open is to kill everything in the room. Every little alcove has groups of Orcs in it and there are a few patrolling Dragonkin. None of them hit hard at all on a level 85.

After the doors open, go through and keep going up even more stairs. You also get to keep turning left. 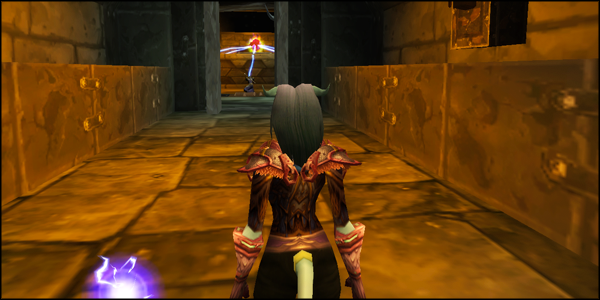 The door marked on the map is locked but we need to go through it. All the NPCs are too busy summoning a fire elemental to let you attack them. Luckily there is a way to break their concentration.

Click on the conspicuous gray altar and then kill the NPCs when they stop summoning. After that you will have to wait for the fire elemental boss to power up. Eventually you will be able to attack him. Once he dies, the locked doors will open.

The infamous whelp room is still full of eggs that will hatch and annoy you.

Our goal is to run up the grayish rubble on the side there.  You will pop some whelp eggs doing this, but they don’t hit very hard.

When you can no longer see the whelp room, you should be on the top level. check your map. It should look like this:

Looking at the map. it looks like you would have a straight shot to the yellow room with General Drakkisath, but you don’t. There is a locked gate that will only open when you kill the boss in the green room properly known as Blackrock Stadium.

(They really overused the locked door mechanic in this dungeon.)

You can get to the Blackrock Stadium however you like. All paths are full of NPCs, but none of them are hard to kill. Personally, I went into the larger room and went through it and up the stairs.

I like to jump down into the stadium, so that is what I did. Jumping in, or entering it through one of the gates, will start the fight. Do not go into any of the side rooms because that tends to bug the fight and you might get stuck in there when the gates close. This is really annoying because the whelps constantly respawn and the only way out is to hearth.

This is a gauntlet fight and several rounds of NPCs will come at you from various directions. Eventually they will get tired of that and Lord Nefarius will order Rend Blackhand to come finish the job. You have to be patient and wait for him to get down to the stadium.

Killing Rend Blackhand will open up the last pesky gate.

There are lots of patrolling mobs between you and General Drakkisath, but that is the main obstacle now. The map is nicely straightforward about where to go.

The General is standing directly in front of the orb you need to turn your quest in.  There is only one thing to do – remove him.

Once you turn in the quest, you are able to click the orb in Blackrock Mountain and it will teleport you into Blackwing Lair. There is also a portal to BWL in the dungeon that you can see on the map, but it won’t let you go through unless you are in a raid group. So you will need to run back outside the dungeon.

The orb is guarded by NPCs but they aren’t going to be worrisome if you a high enough level to consider soloing Blackwing Lair.

Good luck with your pet farming!