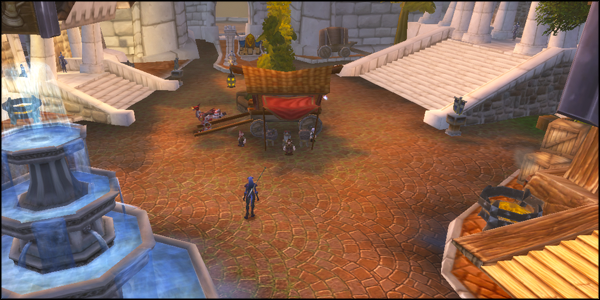 The realm I first started playing on (and the realm where most of my characters still are) is Eldre’Thalas. This has been listed as a ‘Medium’ realm since I started playing in late Wrath.

I think Medium was a correct description for it throughout Wrath and Cataclysm. Maybe even at the start of Mists. I don’t think it is now though. I am not a raider, so I don’t know if this is due to lack of raid guilds or what. I do know a few big ones left the server towards the end of Cata though.

Anyway, my hours of play are strange. I tend to be on at around 3am on weekdays and then a lot during the weekend. Occasionally I am on a few hours in the afternoon during the week.  This year I started noticing a lot fewer people on at 3am, but you know it is 3am so I didn’t think much of it.

Then I started noticing formerly busy places like Halfhill resembling ghost towns. I am used to the Market having so many people that it is hard to interact with the NPCs. The last few weeks that has not been a problem.

So I decided to check out my Shrine in the Vale.

I realize I was checking in the afternoon, but it was so…empty. I am used to seeing other people out and about. Maybe that is because a lot of my kids “live” in Dalaran which is a crossrealm zone.  I was surprised to see so few people in the end game city of this expansion.

I decided to check other places on various alts. The most obvious place to check was Stormwind.

So the Dwarven District was almost completely empty. No one was in the auction house. One person was in the bank and two people were at the blacksmith trainer/vendor. This is not normal even for a weekday afternoon. In Cata I usually saw 5-6 people at the very least at 3am when I was doing cooking and fishing dailies.

The Trade District was a bit better. There were several people idling around the fountain. People were in the auction house and the bank as well.

Here is the issue, the scene above is what the Dwarven District used to look like every day. The Trade District used to be so full of people that it would lag me out. People were everywhere and hanging around on flying mounts too. Today that was not the case.

So…it seems pretty obvious to me that my server is dying. I expect some of this sudden emptiness is due to the recent sale on character transfers. I’m not sure how bad it is on the auction house. I’m not a big spender and I don’t buy a lot so I can’t compare. I suspect it probably isn’t good though.

Ironforge has been instanced for me ever since crossrealm zones became a thing. My bank alts are based there so I had no idea that the bank districts in Stormwind were becoming empty. My level 85-plus alts are all living in Halfhill as well so I don’t really know if the empty Shrine is new or not. I just know that today freaked me out.

Even if I’m playing solo, I like to see other people running around. I love to people watch and to check out other people’s transmog. I even enjoy seeing them bragging on their fancy mounts. (Why else would they go AFK in the air by the bank?)

I don’t enjoy only seeing NPCs in a major city. It feels very eerie. That combined with being the only person on in my guild for over three hours was bad.

I am not sure if the new virtual realm will fix these problems or not. It seems to me that Blizzard is basically merging servers while calling it something else. CRZ has had a lot of problems and I’m worried that this will as well.

However I also think that very few realms that are listed as Medium really are.

(Holy crap, if E’T is really Medium than I can’t imagine how one gets by on a Low population realm.)

I am on a couple of other Medium servers and they seem to be in better shape than Eldre’Thalas. The visible population is still kind of low though. It makes me wonder if they are also on the decline and just not as far along yet.

Can virtual realms stop this decline?

Looking at my empty realm, I think it is definitely time to see.

11 comments on “Who Needs Virtual Realms?”